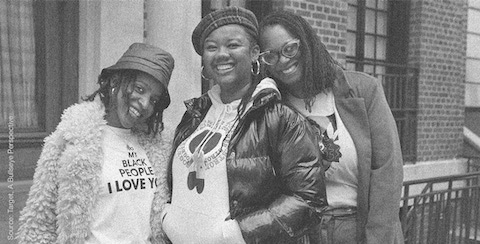 Brands are deeply integrated into our daily lives. They hold a unique position to say something, to serve as a representation of our communities, belonging, and belief. We seek from them a validation of their virtue, proof they are driving connection, and seeking to use their platform for good.

The noise in the market is constantly increasing. Consumers are inundated with an onslaught of information, and the more we find ourselves sifting through inputs, the more we as humans crave authenticity, connection, and realness. Something to hang onto, lean into, and identify with. We’ve lived through a time where our differences have been highlighted on the world’s stage, but at the end of the day, it’s our similarities that we collectively crave.

During Black History Month, brands everywhere are changing their logo, making their declarations, and—for a month—they make an effort, take action, and have a voice. But the decision to speak in a racially sensitive way, or to take a stance around social issues impacting our communities, often causes brand leaders to pause and ask themselves—should brands have a voice in this space?

When asked, 61 percent of brand leaders say yes, without a doubt. However, 34 percent believe brands should speak out, but with caveats. So, what are the caveats? When is it appropriate for brands to speak out? And, if they are a part of the conversation, how do they do so authentically, and honestly?

Here are a few considerations brand leaders must acknowledge:

One Time a Year Isn’t a Movement, It’s a Campaign.

And, the world knows the difference between the two. It’s one thing to take a stand, draw a line in the sand, and tell the world where your brand weighs in on the topic in a racially sensitive way. It’s an entirely different type of energy to use race (or any social issue for that matter) as a marketing campaign.

Do This: This year, Target has created an exclusive collection created by and for the Black community that is part of a larger, ongoing campaign called Black Beyond Measure. Along with their in-house design team, Black designers and creators from Historically Black Colleges and Universities (HBCUs) competed to have their designs selected for the campaign. The collection includes apparel with messages like, “Black & Beautiful” and “You good?”, as well as goods such as skincare, pet accessories, and home goods from Black-owned businesses. Most importantly, the campaign involved included and consulted leaders and creators from the Black community throughout the process to ensure it was racially sensitive in a thoughtful and respectful way.

Not That: In 2017 Pepsi released a campaign that in their words was, “trying to project a message of global unity, peace, and understanding.” The resulting ad depicted a cheerful-looking group of protesters, culminating with Kendall Jenner handing a police officer a can of Pepsi which is met with elation from the protesters and a smile from the cop. The ad faced severe backlash based on the tone of the spot which trivialized the very real experience of protesting, police brutality, and Black lives. Pepsi eventually pulled the ad, issued an apology, and other brands took notice of the critical and careful way their consumers were watching.

What we can learn: Lead genuinely.

If your organization genuinely wants to use its voice to exemplify and champion equality, then it should be evident and obvious in parts of the brand experience outside of the words written and statements posted. If racial equality is not visible, then the organization’s intention, the effort to improve equality, and the action being taken should be. It’s when brands pop up out of nowhere in the month of February with an opinion that consumers have questions. According to a Pew Research study, 69 percent of those who have heard public statements about racial inequality from businesses say pressure from others to address the issue motivated the statement. Consumer skepticism is not misplaced, and capitalizing on social pain for marketing is never a strong move.

Before we can truly be an equal population, we must first learn to include all people. For companies to achieve this, it means cultivating a culture that celebrates inclusivity. Only then is it possible to create authentic brand narratives that express equality, inclusivity, and diversity.

Do This: In a remarkable year for at-home workouts, Peloton led the industry in defining and creating a community and culture around their brand. Late last year, the company announced a multi-year partnership with Beyoncé. The collaboration includes themed workout experiences commemorating homecoming season, a tradition at HBCUs (historically black colleges and universities), along with giving two-year digital memberships to students at 10 HBCUs. This partnership allows Peloton to please their existing customers, while also expanding their reach and including new customers.

Not That: Launched in 2004, Dove’s Real Beauty campaign was named The Best US Campaign of the past 20 years by PR Week in 2019. The ads garnered praise for depicting diverse women with “real” bodies before body positivity, self-care, and social justice were standard considerations in the ad industry. However, the campaign was not without missteps, such as showing a black woman transforming into a white woman while using the product. The ads were met with a swift wave of criticism across social media and, after additional instances, left many consumers questioning whether Dove was truly learning their lesson.

“Where did Dove go wrong? For us, the most salient issues were the enduring failure to act and listen when consumers tried to have a conversation with Dove,” said Olivia Zed who conducted a case study on the campaign.

What we can learn: Equality starts within.

It is important for brands to understand that you cannot manufacture a genuine sentiment, without recognizing that ongoing attention to the changing climate and culture is imperative when running campaigns with a long life span. When organizations are aligned operationally on where the subject of race and inclusivity falls within the brand mission, decisions are made differently, marketing is positioned in a racially sensitive way, and partnerships are forged differently. The prioritization of equality in all ways across the organization will change the organization from the inside out and create a noticeable difference for conscious consumers.

Having a Clear Stance Should Be a Priority.

Taking a stance in any arena, on any topic, typically means someone goes first. Alone. Without a crowd to drown them out. For brands stepping out into the conversation during Black History Month, they will find themselves surrounded by the droves of other brands doing the same. But, there is an opportunity for brands to take this important topic of equality, diversity, and race and give new thought, new life, and find new ways to move the needle forward toward a more equal, racially sensitive universe. Although taking a stand may feel like a risk, the true risk is to do nothing. When making your position clear is thoughtful and well-executed, it can leave a lasting mark on consumers and ultimately benefit your business.

Do This: ThirdLove, a leading e-commerce intimates apparel brand, launched a new program called the TL Effect in July 2020 that invests in female entrepreneurs of color. Each quarter, ThirdLove will choose a business owned by a woman of color to provide monetary support, fundraising assistance, office space, mentorship, and exposure. As a female-founded business, CEO and Co-founder Heidi Zak said her team spent time brainstorming ways they could make a difference in the midst of cultural change and added that she recognizes they still have work to do as well.

Not That: In February 2020, Barnes and Noble launched a campaign called “Diverse Editions” that reimagined classic books with protagonists and characters of color. An author interviewed by NPR said there were many ways to get this right, but the bookseller seemed to go looking for ways to get this wrong. A more egregious part of the problem was the lack of representation for Black authors, artists, and the Black community throughout the campaign. The classics getting new covers all had white authors, except one. White stories, being told through that lens, and slapping a new cover over the book doesn’t accomplish the assumed original intention of Barnes and Noble, while their marketing team capitalized on Black History Month.

What we can learn: Step out and deliver value.

When we see brands offer up value—even, and especially, on a difficult topic—we see the marketplace stop and take notice. It is value, or the lack thereof, that brands seem to get so tripped up on. For today’s brands, stepping out and blasting an opinion without contributing to the momentum of change runs the risk of sounding tone-deaf to a marketplace searching for authenticity and craving connection. Brands have an opportunity to create connection and awareness by using their power to amplify a cause and create change.

We can all agree that with the state of our world, nation, and neighborhoods, equality is the way forward. Our hope is that we continue the fight for equality and open our arms a little wider to embrace the differences, the similarities, and the human side of all of us. And, for brands, you listen first and use your position in people’s lives to spark change, curiosity, and equality.

At Rebel, we spend a lot of time thinking about diversity in our organization. We are a woman-owned company, 50 percent female, have strong representation across age groups, backgrounds, and experiences, and are striving to consciously create a culture of inclusion. And while we’ve made strides, we still have a long way to go to reach our vision for what our company can and should be. But, this alone is not enough.

We want a broader representation of people on our team. Rebel values diversity in race, sexuality, and gender as well as education, background, and personal experience. We know that inclusivity and equality in opportunity will make our work better, ourselves better, and allow us to better serve our clients.

As Rebel grows, we are committed to an equitable culture that is inclusive, representative, and diverse. We know it is imperative to the future success of our work, and our ability to serve and guide our clients. That means a seat for everyone at the table. Making that a reality is our responsibility and an obligation that will define our future and shape the look of the Rebel team in the years to come.

Previous Resource Back to All Next Resource

We answer big questions. We answer small questions, too. Whatever your Q, chances are it’s on our FAQs page.

Give us your most wicked business challenge. And we’ll find truths in places you wouldn’t expect. So, whaddya say?

Let’s Get After It