Why we took on the topic of Dobbs.

Gnarly, difficult conversations, seemingly unanswered questions, and uncharted territory are in the DNA of Rebel. As a research and strategy agency, we work with global brands to identify the needs of their target audiences, and then we create the strategy that meets those needs.

We use research to create action.

When the Supreme Court overturned Roe v. Wade, women on both sides had a lot of questions. Those questions bled into our conversations at home and at work. To us, the noise felt like it was becoming louder and louder. Our employees were asking questions we couldn’t answer.

We wanted to push past the noise, listen to the voices of the women, their stories, experiences, questions, fears, and to tackle the tough questions about real decisions that have to be made moving forward.

We felt the need to tackle this topic with the goal of understanding how we got here, how women across the country were actually feeling, and what this meant for women and American society as a whole.

Our goal was simple: eliminate the noise and put the voice of women front and center.

The current public forum does little to advance the voices of ordinary, everyday citizens. It is our hope that this research sparks new conversations, creates empathy, and drives connection.

What we learned through our research.

When we launched the research, we weren’t entirely sure what we’d find. We figured the opinions on the topic would be split along party lines.

Instead, what we found was an overwhelming sense of frustration among all women of all parties.

THE VOICES OF THE WOMEN

The consensus among the women we spoke with was that the Dobbs decision improved nothing.

Have a listen to what they had to say:

Moreover, women, irrespective of political affiliation, lack faith that their state legislatures are going to create solutions that support them in any capacity. In fact, most women we spoke with wholly believe that not only are they not on the radar of their policy-makers, many of them believed the rhetoric was little more than lip service.

Listen to their voices.

"Our governor, no. House of Representatives at the state level, no. I do tend to be a person who sends emails saying I support voting on such and such in this manner. I do feel like they're going to vote how they're going to vote and they're not really listening to what their constituents are asking for."

…I don't think it will become a priority until a majority of people are candid and honest about their opinion and say, look, we would rather talk about how do we prevent this? And I don't really think that's on anyones... I'm not saying I have some deep philosophical insight into society or to the state legislature at all, but I don't think that's on anyone's real radar if that makes sense. I think they stand to gain more on both sides from a divisive rhetoric than they do from where do we agree.

We have two senators in each state. Neither of the senators in this state care about anything, regardless of all the letters that I can write. And it's because they have their interest. They have to side with whoever the leaders are of their party. And so it's their career. The way I see it, if they are going to advance in their career, they have to align to the people that will benefit them, regardless of the impact to half of the population.

Here’s Why it Matters

The collective voices of women over the course of history is what has moved the needle forward, time and time again.

Women in America have come a long way and have seen many, many victories over the years.

1776: Abigail Adams sent a letter to her husband, John Adams, and the Continental Congress, as a private plea to “remember the ladies.”

1869: Wyoming, the 44th state to enter the union, becomes the first state to grant women the right to vote and hold office.

1917: Jeannette Rankin of Montana is sworn in as the first female elected to Congress as a member of the House of Representatives.

1920: The ratification of the 19th Amendment is complete, giving women the right to vote.

1961: Rules in Florida are upheld by the Supreme Court making it less likely that women are called for jury service because a “woman is still regarded as the center of home and family life.”

1972: Title IX of Education Amendments is signed into law by Nixon.

1974: Women could obtain a credit card or loan without a male signature with the passing of the Equal Credit Opportunity Act.

Women throughout history have fought hard for equality.

Prior to these major moments in our collective history, women were relegated to working behind the scenes to make a political impact or resigned to remain more reactive than proactive when planning the trajectory of their lives.

Today, women are using their voices to impact change in real ways. And, they're demanding real solutions.

The Advancement of Women

Over the last decade, women have made significant advancements. Yet, despite these advancements, women still lag behind their male counterparts.

We’ve Got Work To Do

It’s true: the Dobbs decision is a big, hard conversation with no easy, direct answers. But, looking at our timeline, we’ve had difficult conversations before.

When we asked women what they wanted to see moving forward, their answers were surprisingly similar—regardless of where they fell on the spectrum of pro-life or pro-choice.

The voice of women.

We’ve thought a lot about how we, as a company, respond to this. To be honest, when the news first hit—like many others—we stopped dead in our tracks. We had a few big questions to answer in our own organization.

As a CEO, mother, and woman—my concerns mounted. How do we navigate this well?

I’m going to be honest, I wasn’t sure. There are days, I’m still not entirely sure.

What I do know is that together, we can move the needle forward. Regardless of where we individually stand on this topic, the reality is: we can do better.

It is my hope that you read this report with an open mind and create the space to hear voices that may oppose your own. From here, together, we can create solutions that enable progress for women across the country. 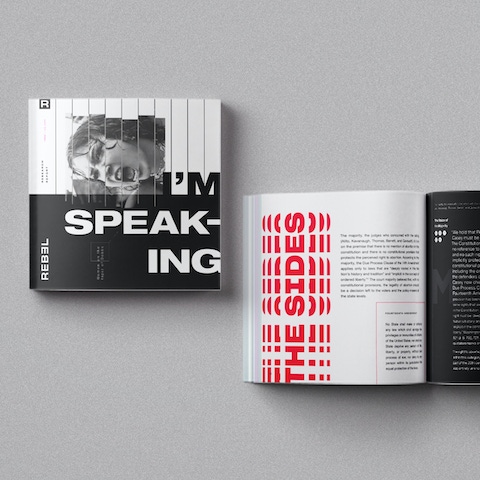 Women on the Topic of Dobbs

In July of 2022, Rebel surveyed 2,593 women and conducted ~13 hours of 1:1 interviews with women and men across America on the topic of the overturning of Roe v. Wade. What we found is highlighted in our report.

We have more in common than we realize.